All the mentioned datas are conventional, and we can also produce as per customer’s special requirements.

The Model “JYQ” Mechanical-hydraulic Drilling Jar is a jarring and stuck releasing tool. It integrates the up jar and down jar and can release the stuck accident occurring during drilling operation. The Drilling Jar is an ideal tool for directional well and deep well drilling.

Full Hydraulic Drilling Jar Type “QY” is a kind of unfreezing tool for drill string when they get stuck. It is an integral hydraulic jar with up jarring and down jarring. When a bottomhole assembly becomes stuck, the jar can deliver an extra-heavy impact to unfreeze with up jarring or down jarring, thus normal drilling operation can be recovered quickly.

Model “CSJ” Super Jar is a hydraulic tool, realizing the stepless control of up jarring tonnage. Thescope of time delay interval can be 30s～240s; the scope of service temperature can be -40℃～180℃. It can be use new special material as the requirement as to obtain higher using property and safety. It should be used for fishing and coring of up jarring.

Model “DJQ” Cable Jar, which can store energy by downhole motor to shock, is a kind of electric tool that removes the stuck accident in the process of logging.

More information about other types of jars are available upon your request. Please send us a letter at sales@jcmec.com

Model “YJ” Hydraulic Shock Sub should be mounted on the drilling string near the bit, absorbing or reducing axial vibration and thrust load of the drilling string. And it has a good results for prolonging the service life of the bit and protecting the drilling tools and the surface equipment.

Model “SJ” Two-Way Shock Sub should be mounted on drill string which is near the bit. It can slow or sorbs the longitudinal bounce and peripheral torque impact of drill bit (drill string) simultaneously. It should realize the best fitting of drill pressure and rotation rate as to reduce the drill cost and improve the drilling efficiency. It can be used for the drill-in or coring of hard layer, gravel layer and soft-hard interlayer.

Model “DHJ” Mechanical -Hydraulic Shock Sub, which can adopt the dished spring and silicone oil, is a two-action shock sub, being able to absorb the bounce and jounce of drill tool. It has advantages of good serviceability, high load bear and long service life. It has a characteristic of changing the rigidity as to protect the bit optimally, suiting the requirement of different layer.

jarring force for Hydraulic Jar. It should be applied with Hydraulic Drilling Jar Type QYⅡ jointly. The drill collar and Hydraulic Jar (below the Drill Accelerator ) can function an accelerated effect when jarring operates as for making the stuck point gain more jarring force that can increase force for two times at the highest. Meanwhile, it can decrease the bounce-back shock after jarring as to protect the drill tools above Drill Accelerator.

Two-action Drilling Accelerator Type “SZJQ” can be stored energy by hydraulic spring. It should be applied with Model QY II Hydraulic Drilling Jar jointly. The drill collar and Hydraulic Jar (below the Drill Accelerator ) can function an accelerated effect when jarring operates as for making the stuck point gain more jarring force. Meanwhile, it can decrease the damage of tremor produced by up-down jarring for drill tools above Drill Accelerator.

Model “YJQ” Hydraulic Accelerator can be used with Model YSJ Hydraulic Jar and Model CSJ Super Jar. It can be mounted above Top Jar ( It is recommended that 1~3 pieces of drill collar can be connected ) as to obtain more up-jarring. It has the advantages of compact structure, reliable sealing and high strength. 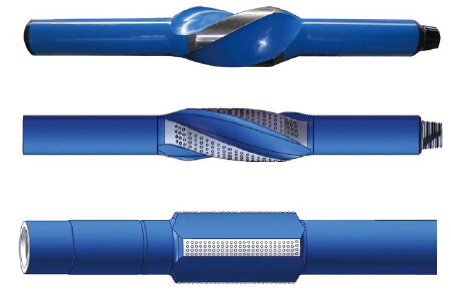 Hole Opener is used for enlarging the surface hole which drilled by cone bit in advance, or connected above the cone bit. It applies to Onshore and offshore oilfield.